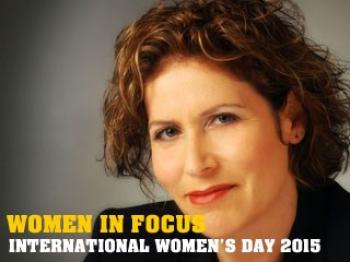 Ticket Price: $80 (all ticket sales will be donated to Sydney Community Foundation

Speaking at the event will be Zika Abzuk from Cisco leading implementation of 'Smart Cities' in Israel; Jane Jose Chief Executive of Sydney Community Foundation; and Manal Zraiq General Director from Massar International and a pioneer supporting business women in the Middle East. Women in Focus will be donating all ticket sales to the local charity Sydney Community Foundation, a not for profit organisation helping people realise their philanthropic goals.

We hope you can join us, and make your commitment to those supporting women in our community. We encourage you to share this event with the significant women in your life, your niece, daughter, mentoree or mother, and be part of empowering women and girls in our community.

Zika Abzuk is currently a business development senior manager in Cisco Europe and is leading Cisco's  Country Transformation initiative and implementation of Smart Cities in Israel. Prior to becoming a senior manager in business development at Cisco Europe, Zika led Cisco's corporate social responsibility efforts in Eastern Europe, Israel, Palestine, and sub-Saharan Africa. In this role, she managed the implementation of several social investments including a $10M commitment in five African countries and a $10M commitment in the Palestinian Territories.

Zika and her team have designed, initiated and implemented a number of global programs that emphasise collaboration, building leadership skills, and promoting economic opportunities in Europe, the Middle East. These include, the CKC ( Community Knowledge Center) model in Sub Saharan Africa and the Ma'anTech program, a joint initiative between Cisco and the Office of the President of Israel that aims to integrate Israeli Arabs into Israel’s hi-tech industry.

She also holds a Masters degree in Mathematics from Tel Aviv University.

Manal Zraiq is a Partner, General Director of Massar International, and a pioneering woman supporting and lobbying businesswomen's development and advancement in Palestine. She is an experienced business executive who has been with the company since its inception. Her dedication and persistence to promote business development, particularly women, has positioned her as one of the most outstanding businesswoman executives in Palestine.

Cities, people and city life fascinate Jane. As an urbanist, Jane has written, shaped and set policy to make great public places for people to enjoy in cities across Australia. She now brings two decades of experience in working with communities, architects and designers, urban leaders and government to her work at the Sydney Community Foundation.

An independent not for profit community foundation focused on Australia’s largest city of 5 million people, Sydney Community Foundation directs philanthropic giving to those most in need, supporting grassroots organisations, creating change and helping people, one by one.

The Sydney Women’s Fund, its major sub-fund, donates to grass roots programs that protect, support and enable women and girls in greater Sydney to thrive.