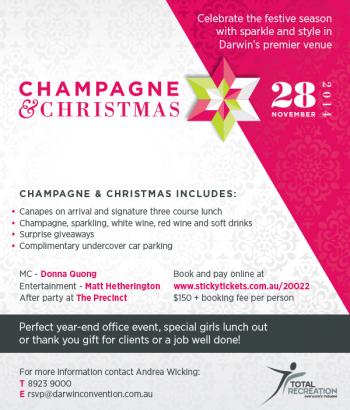 This is the perfect year-end office event, special girls lunch out, or thank-you gift for a job well done.

Matt Hetherington is an award winning Australian singer and actor, who rose to prominence as a contestant in the first series of The Voice (Australia). He has appeared in musicals Next to Normal, Dirty Rotten Scoundrels and the Full Monty, the latter for which he won the Helpman Award for Best Male Actor in a Musical.

MATT HETHERINGTON is being tipped as the next big thing to come out of Australia. His  extraordinary voice has earned him exceptional reviews from his live band  appearances and his live theatre performances have placed him in high demand  both in his homeland of Australia and overseas. He has spent the last 3 or 4  years traveling to the States to break into the American market.

In August 2004, Matt received the prestigious Helpmann  Award for Best Lead Actor in a Musical for his performance as the star in the   critically acclaimed “The Full Monty”. In August 2003, Matt played Lieutenant Joe Cable in the Rogers & Hammerstein classic “South Pacific” to a sold out  season and with great reviews at Melbourne’s State Theatre.

Matt is well  known to many people from his many years of live band work with his band “Matt Hetherington & Beyond Belief”. Matt graduated from the highly respected  Western Australian Academy of Performing Arts (WAAPA) in 1996.

His theatrical   credits include: “South Pacific”, “Hair”, Potsie in “Happy Days, The Arena   Spectacular”, “I Love You, You’re Perfect Now Change”, “The New Rocky orror   Show”, “The Boy From Oz” (original workshop), “The Wind In The Willows”, “Big   River” (awarded best actor by the Victorian Musical Theatre Guild) and “After   The Beep” (a new Australian musical).

His television credits include: “Stingers”, “Marshall Law” and “Sea Change”. Matt  has worked extensively as a band singer and as a guest artist has appeared on:   GMA with Bert Newton, Hey Hey It’s Saturday, Denise, IMT, Mornings with  Kerri-Anne and In Melbourne Today with Ernie Sigley. For the last couple of   years his band: “Matt Hetherington & Beyond Belief” has been widely regarded as the best corporate act in the country.This year. the Centre has chosen Total Recreation as its nominated charity to assist in continuing its vital role in the community.

Total Recreation was established in 1991 in acknowledgement of the major part that leisure plays in people’s lives.  People with a disability have the right to the same opportunities as other members of society to participate in sport and recreation activities.

Individual tickets can be purchased and for group purchases, please be aware that tables are strictly for 10 only.

Please advise if you wish to sit with some one or a group, if purchasing individual tickets.

Please advise of dietary requirements or any other special needs, so we can ensure they are accommodated.

No refunds are offered.

This year. the Centre has chosen Total Recreation as its nominated charity to assist in continuing its vital role in the community.