Frocktober: Every Frock has a Story by Fashion Stylist Esma Versace

This week at CharityDOs we highlight how fashion’s most loved and worn item, the frock, can help in the fight against an insidious disease known as ‘the silent killer’.

The power of the dress is both simplistic and mysterious.  No other item of clothing can make a woman feel more womanly, graceful, sexy or powerful.  A dress is the universal symbol of femininity and is worn by women of all ages, shapes, sizes and nationalities.  It can represent the most important events in a woman’s life – love, success, friendship, family and heartbreak.

The dress represents moments in history that have pushed boundaries, created trends, changed cultures and brought about scandal in all genres from art, culture, celebrity and politics.

Closer to home, the fashionable frock has joined in the fight to find a cure for ovarian cancer and brought about an important fundraising initiative that began in Geelong in 2007 when a group of girlfriends donned dresses, went to their favourite pub, passed a stylish hat around and raised $200 to donate to ovarian cancer research.  This determined group of friends did not stop there and decided to get the rest of Australia involved too – and voilà, Frocktober was born.

Seven years later the Frocktober initiative has raised $800,000 for ovarian cancer research and next month, October 2014, you too have the chance to participate by simply donning a dress to help raise money for an insidious disease that will strike approximately 1500 women of all ages in Australia in 2014.

Ovarian cancer is often referred to as the ‘silent killer’ as symptoms can be non-specific and strikes without warning.  There is no early detection test available and usually the cancer has spread before detection and only 20% to 30% of women will survive beyond five years of diagnosis.  In comparison, survival rates increase to 80-100% when ovarian cancer is detected and treated early.

Frocktober helps to raise funds for research into ovarian cancer and their mission statement is:

“For the good of women's health, we'll Raise our voices, and some wealth.  October, 10th month of the year, we'll create awareness, knowledge share.  Kick up our heels, reject our jeans Take Nan's old dress, take to machines .... Our message is "We're Beautiful – no matter size or shape".  Enjoy the month, frock up and please... Reach deep for FROCK-ing sake!!!”

There are so many easy ways to participate in the Frocktober 31-day challenge.  Wear a frock one day of the month, week, or fortnight in October or of course if you’re up for the challenge, don a frock daily.

As someone who likes a good ‘girlie-get-together’ filled with champagne and laughter, Frocktober’s event suggestions such as hosting a Frocktail party, a frock morning or afternoon tea or a frock swap, are just the ticket for fashionable party girls.

So this October buy, swap, beg, borrow or steal (only from the closets of relatives and friends) a frock for the month of October and help raise money for this important cause.  Visit the event page to find out more.

Here are 10 frocks that created unforgettable moments in history.

This little black dress caused scandal in Paris society in 1884. The painting of young socialite Virginie Amélie Avegno Gautreau by John Singer Sargent was considered highly suggestive in manner and dress and caused Gautreau to retire for sometime from society.  It also curtailed Sargent’s career as a portrait painter in Paris. 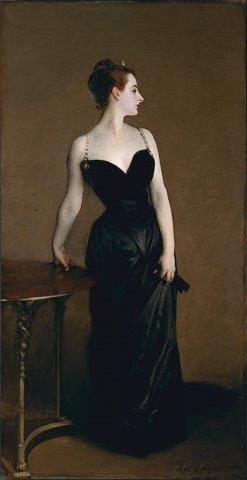 Coco Chanel remains fashion biggest influence and revolutionized the way women dressed in the twentieth century.  Chanel did away with the restricting corsets, elaborate headwear and long dresses of the day and gave women freedom in the form of short, uncluttered dresses in shades of black, white and beige. 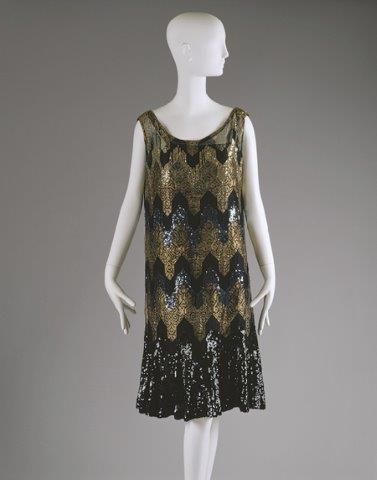 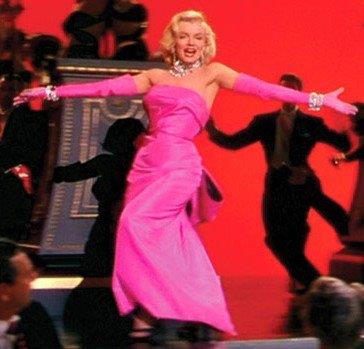 You can’t have a list of history’s most iconic dresses without including Audrey Hepburn from Breakfast at Tiffany’s.  Both the long black evening dress and chic day dress are perhaps the most famous and well-loved frocks of all time. 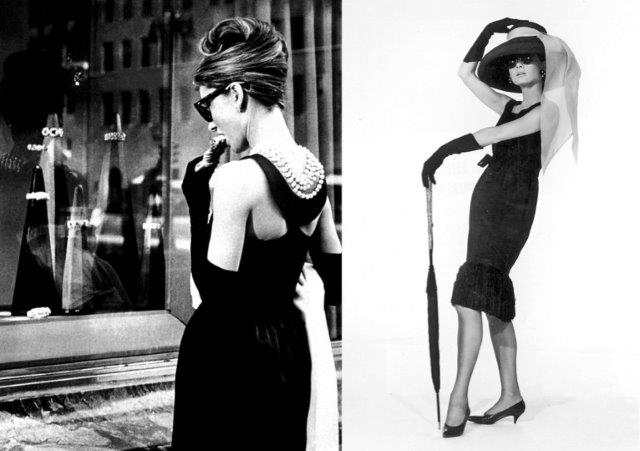 Yves Saint Laurent’s Mondrian dress was a masterpiece in tailoring and fit.  Inspired by the abstract paintings of Piet Mondrian, the dress was a demonstration of the best of dressmaking skill and artistic genius.  The dress was a huge success with the well-dressed and wealthy and also a huge commercial success with the design being mass produced around the world. 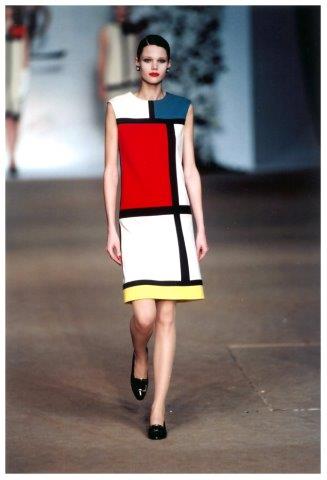 The invention of the wrap dress in 1973 by Diane Von Furstenberg is one of the most successful fashion ventures to date and is still being created 41 years later.  The end. 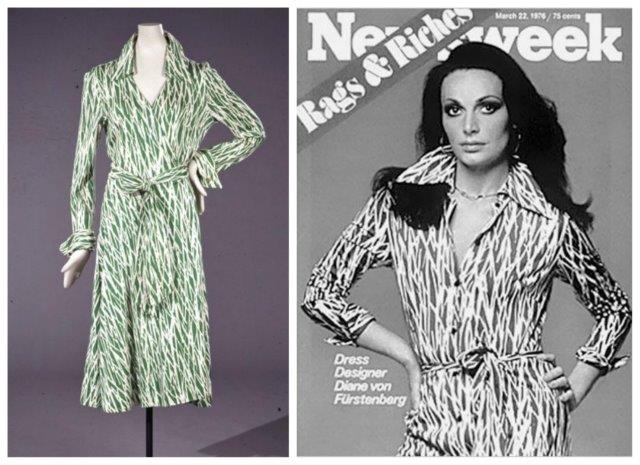 Princess Diana’s LBD dress was dubbed the ‘revenge dress’ when she attended a Vanity Fair party after her separation from Prince Charles in 1994.  The sexy dress represented her freedom from the restraints of royal dressing and gave her ex-husband and his family a huge and well-deserved middle finger. 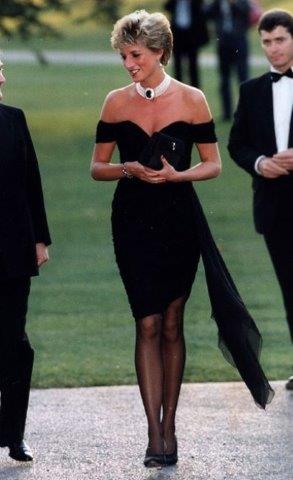 Both the dress and Elizabeth Hurley became a household name in 1997 when Hurley stepped out on the arm of Hugh Grant to attend the Four Weddings and a Funeral premiere.  Lady Gaga recently wore the dress but the impact shadowed in comparison to the original moment in time. 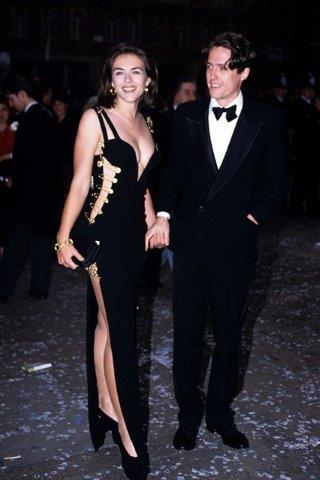 Another celebrity on the red carpet and another Versace creation, Jennifer Lopez’s revealing floral at the 2000 Grammy’s still lingers in our minds 14 years later. 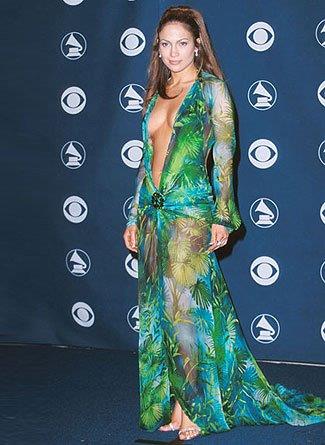 Perhaps the most anticipated and watched wedding dress of all time, Kate Middleton’s magnificent Alexander McQueen bridal gown was loved by millions around the world, but her sister Pippa’s bridesmaid proved to be the most critiqued. 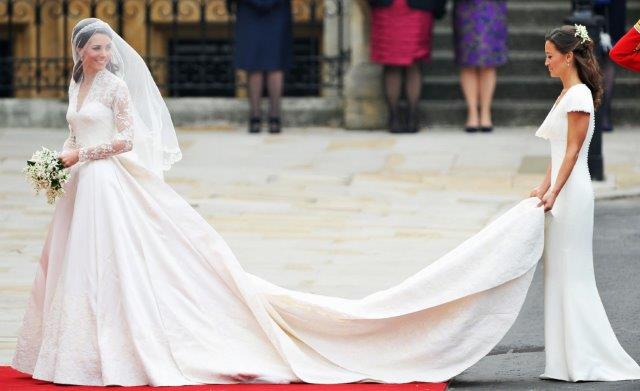